It's been comforting to have family and friends come together for my Dad's funeral. Due to various differences I wasn't at all sure how the various… factions... would gel, but it turned out well. Seeing the huge number of people that attended the funeral and shared stories about my Dad is a testament to how loved of a man he was.

It's been the worst and hardest time, too. I've lost my father, my work and my best friend. I miss him. It comes in waves; sometimes it's nice just to remember and talk about him, but at other times it's crushing and doesn't seem to be worth doing anything at all.

I never want to forget my Dad. To that end I'm going to try and get many of the stories he's told me into writing.

I hope his grandson can remember him, even just a little. Dad liked to nap in the afternoon, but when my nephew was around and wanted to play, napping wasn't allowed! He'd go up and tap on Dad's knee, saying “No sleep Grandad! No sleep!” It soon became a regular little game, and Dad would play - pretending to wake up in a comical splutter. My Dad would always love to entertain his grandson, playing with his toys, reading him a story or just being interested and talking to him with a big smile.

Dad was into his cars before I came along, but sometimes there was a bit of bad luck. He told me stories about his vehicle mishaps - driving up north and having the ceiling lining in the car collapse down over him and his passengers. He bought a small boat once, and when he transported it home on the roof of the car it slid forward over the windshield after a sudden stop. 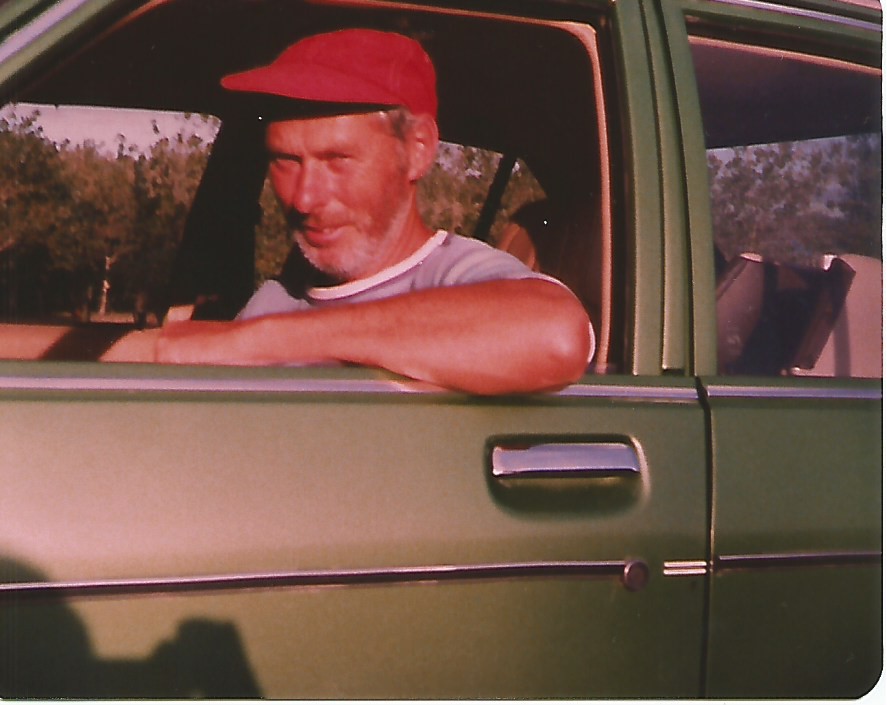 Jump in my car.

He painted and did up that little boat, but he never once used it on water. He was terrified of being in water - he never went swimming, and rarely had baths. One time the family stayed at a motel with a pool while on vacation - I was able to get him to wade in to just below his waist, but it was a challenge! It might have been due to a bad experience he had when he was young, but I never did find out.

Dad traveled a lot, often saying that he'd been around the whole world twice. Despite this vast travels, the stories that stuck with me were the little comical ones. The first time he was overseas and saw a KFC restaurant he was shocked! “Chicken? Why would they do a place that sells only chicken?!” In his life chicken was something you brought young and raised in the backyard for eggs. The only time it was eaten was when the old bird stopped laying eggs - and by then it was a tough and bad tasting meat, only served as a last resort. The idea of a shop selling that awful food was just crazy! Still, later he became a fan of crispy oven baked chicken wings.

Dad and his traveling partner often got into places they were probably not allowed, just by showing up and asking the right questions. As a railway enthusiast he wanted to see train depots around the world, and they were regularly able to smooth-talk themselves into a guided tour.

That took a few days to put together. It's more difficult than my usual writing to put this stuff together, but I intend to add to this. I'm trying, here.